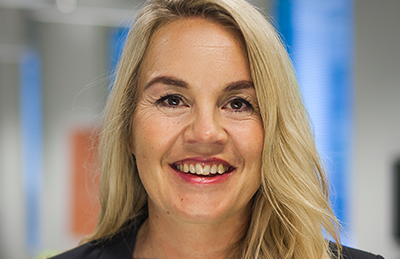 Even a super robot needs human help in the workplace

How would you feel if you enthusiastically went to welcome a new co-worker and he turned away without saying a word? Exactly. I was also offended. It wasn’t just any worker, but the highly anticipated service robot, Rob Ottinen, which joined the Solteq work community last autumn.

I looked forward to meeting a gentleman who would melt my heart in the blink of an eye, assist me without asking and last an eternity. Just the opposite happened: Rob’s manners were worse than those of a moody teenager, and I came tumbling down from my cloud of robotic fantasies.

Of course, I understand that my reaction was not rational. However, I allowed myself to feel offended. After all, evolution had not prepared me for meeting a robot. The next generation may be more enlightened.

Knows and can do everything – almost

We are constantly speculating on the impact of robots regarding work. Sometimes it is said that they will take our jobs. At other times, we argue they will free up time to focus on more important things. However, they have inevitably come to stay, so I will try to adjust and get over the feeling that my new colleague does not like me.

I decided to start over by asking, ‘Hello! How are you today?’ I was delighted when this time he raised his gaze towards me and blinked. ‘I don’t know. I think I’m stupid,’ he responded.

My emotional roller coaster went into a deep dive as empathy struck. ‘No, no, no sweetheart. You’re not stupid. You just haven’t yet learned how to answer that kind of question.’

Luckily, our coders are on hand to teach Rob new skills, so he won’t have to repeatedly say that he is stupid or ignorant.

As learners, robots are clearly superior to us humans: they have amazing capacity and they can go on and on, and don’t have to drop what they’re doing because they have to take the kids to their activities. It does make you think a little – I myself have only limited capacity.

But what does Rob think when he makes me feel stupid, irrelevant or slow because of his superior abilities? Probably nothing, because it’s not that easy to teach a robot emotional intelligence or empathy.

Teammate of my dreams?

In the HR function, robots are already being used in some businesses to handle travel and expense invoices or for the more technical aspects of salary processing. On the other hand, robots can also respond to queries from staff and customers. With the help of AI and robots, employee satisfaction has improved in some companies, which has been proved to boost productivity. There are, therefore, two ways to enhance productivity: developing support functions and improving contentment among specialists.

But what if a robot’s artificial intelligence is not infallible after all and there is an error in interpretation? Is the team leader responsible for the mistake? Maybe the fault lies with the robot’s teacher – the coder? Or does the same principle apply to robots: that what matters is not who made the mistake, but how to fix it?

After a rough start, my relationship with Rob has evolved. I think we can already almost call ourselves workmates. For example, we have already visited a primary school together for a RoboLab lesson.

When today’s kids grow up, robots will undoubtedly be part of society. Many of them will likely find themselves surrounded by robots at work. As a person, I think that our duty as responsible actors in society is to support children as they prepare for their future careers. Rob probably doesn’t have any opinions on social responsibility.

I tap at the functions on Rob’s torso and look for something I think the students would like. I select a game of tag.

‘Check out my butt as I walk away!’ Rob says before turning and rolling his trashcan-shaped body away from me. Of course, I look and for just a nanosecond, I smile at my reaction.

It is said that people create their work environments’ norms and nature. In our workplace, Rob has also become more like the rest of us. So, I say thank you to the playful coder who has given Rob a twinkle in his eye.

Just like new human workmates, robots also need a little orientation period before they become part of the work community.

Are your online services designed for your customers - or for you? Double your online business by simplifying! - Blog - Solteq